Objective: Release and Deployment Management aims to plan, schedule and control the movement of releases to test and live environments. The primary goal of this ITIL process is to ensure that the integrity of the live environment is protected and that the correct components are released. 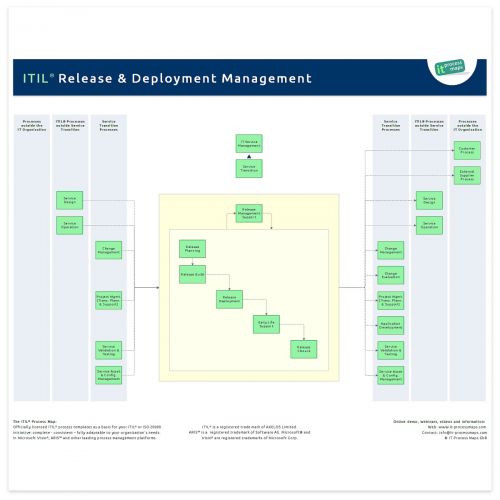 In ITIL 2011 Release Management is called upon from Project Management to perform the detailed planning of Release build, Release test and Release deployment.

The ITIL 2011 guidance also specifies that Minor Changes are implemented by Change Management without the involvement of Release Management, so the Minor Release Deployment sub-process has been removed.

These are the ITIL Release Management sub-processes and their process objectives:

The following ITIL terms and acronyms (information objects) are used in the ITIL Release Management process to represent process outputs and inputs:

[1] A: Accountable according to the RACI Model: Those who are ultimately accountable for the correct and thorough completion of the ITIL Release & Deployment process.

[2] R: Responsible according to the RACI Model: Those who do the work to achieve a task within Release Management.

[4] Process Owner, IT Operator, Facilities Manager (and others, as appropriate)