Definition: The Release Policy represents a set of rules for deploying releases into the live operational environment, defining different approaches for releases depending on their urgency and impact. 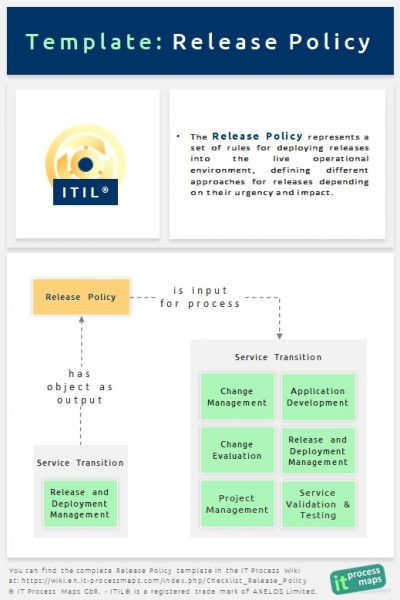 What are the specific conditions which make a certain approach the preferred option, e.g.

Service Level and Operational Level Agreements typically specify availability targets, including allowed windows for maintenance during which the service might be unavailable. Unless Emergency Releases are required, Releases are routinely deployed during these maintenance windows. Release Management therefore needs to translate the service-specific constraints into Release deployment constraints for the systems, applications and other components which are required for the service to be available.

(Preferred mechanisms to automate the deployment of Releases)

Is based on: Checklist 'Release Policy' from the ITIL Process Map