This step determines which inputs each ITIL process receives from other processes, and which outputs it must produce so that subsequent processes are able to function.

These inputs and outputs are also called ITIL information objects: Structured sets of data, like e.g. an Incident Record, which serves to describe a service interruption.

Just how great the importance of process interfaces is for the design of optimal work procedures frequently becomes apparent during the analysis of as-is processes:

Weaknesses in processes often occur at those points where one process ends and another one begins. In many cases one will find interrupted information flows or media breaks – so that the required information is not exchanged as intended. 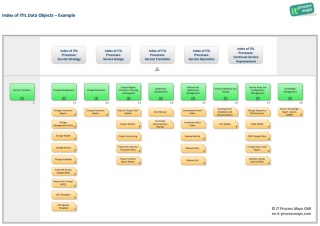 The definition of the process interfaces is taken care of as a separate project step, before dealing with the innards of the processes in detail. Obviously, before being able to define the detailed activities, it must be clear what inputs a process can expect from preceding ones, and which outputs it must produce.

The ITIL Process Map applies a rigorous approach to the definition of interfaces: Information objects may be picked from a central ITIL glossary (see figure 1: Index of data objects (.pdf)) to define the inputs and outputs in a precise way. Every information object contains a short definition to avoid any ambiguities about the expected process results.

A challenge during the definition of the ITIL interfaces lies in the fact that, as a rule, not all ITIL processes are introduced at once, which often means that some of the required inputs for a process are missing.

In order to circumvent this problem, which inevitably springs up during a phased introduction of ITIL, a generic process directory for the IT organization as a whole can be used.

The generic directory offers a structured framework for the definition of process links even if, initially, only a sub-set of the ITIL processes is defined in detail.

Additional ITIL processes can thus be plugged into the process model at a later point in time as needed. 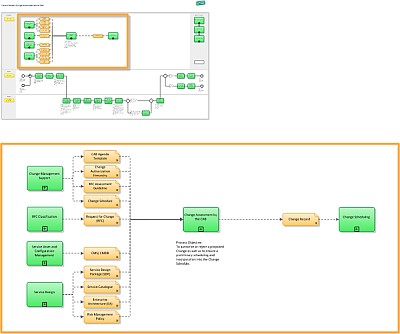 The ITIL Process Map contains two types of models which, in combination with each other, are used for the definition of the process interfaces: